The topwater bite on Guntersville grassbeds is legendary.

Very few things suggest Lake Guntersville better than bass in the grass in the fall.

A year-long process of grass expansion culminates in thick mats that serve as a comfortable canopy for largemouth bass, which lurk underneath and ambush unsuspecting prey. A plastic frog scuttled across the top of the grass is the perfect ticket to unmatched fishing excitement as the mats reach their peak in the fall.

Every year, anglers eagerly await the maturation of the grassbeds and the accompanying frog bite.

“Has the frog bite started? is the standard question repeated in bait shops and on social media in the late summer, probably rushing the season because the best frog bite occurs in the fall.

“It’s something that is difficult to explain until you experience it,” said Guntersville angler Tyler Wilkerson. “There’s no better feeling than watching that frog out in the grass and just seeing a fish come from up out of nowhere and completely eat it.”

Good grass is the key. The mats—some of them rooted and some composed of grass pushed by wind—take on a dead-yard appearance interrupted regularly by “burnt pizza cheese” brown spots. The “burnt cheese” description comes from Jim Leary, owner of Guntersville Bass Guides.

I had originally scheduled the trip with Tyler, who lives near Browns Creek on Guntersville but travels the country as a field service tech for T-H Marine (thmarine.com). He provides on-site expertise and on-the-water service at many of the B.A.S.S. Elite Series and FLW Tour events, traveling from Okeechobee to near the Canadian border this year on the job. 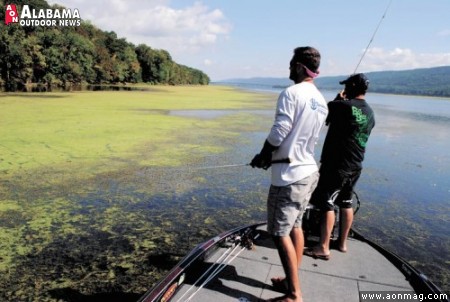 Ironically enough, Tyler experienced boat problems a day before our trip, and he enlisted Jim to help out. I met Tyler and Jim at the Seibold ramp off Highway 79 between Guntersville and Scottsboro, and we scoured the grass there without success for almost an hour.

Despite a huge contingent of boats spread across the grassy flats and humps near Seibold, the bite appeared slow for everyone, perhaps the result of the first major fall cold front to move through north Alabama. The front had created hoody-style weather with air temps in the low 50s, a sharp contrast to the summer-like heat of previous days. The water temperature had plunged into the low 70s.

His idea was to trailer north to Scottsboro and to fish grass near the B.B. Comer Bridge, an area that had produced a couple of huge stringers for him earlier in the week. We made the 20-minute trip and re-launched at the Scottsboro Municipal Park ramp in Roseberry Creek. Motoring out of the creek, we stopped on an extended grass line just off the main channel.

“We seemed to have gotten on some fish that had just moved into the area, and they were really eating the frog,” said Jim.

We fished a line of grass alive with activity, complete with shad and other baitfish of various sizes and also the tell-tale sound of bluegill sucking food off the surface.

“If you can find that area with the sound of bluegills slurping, you’re going to catch at least a few bass,” Tyler said.

The first fish was a non-keeper that blasted Jim’s new Boyd Duckett Series BD Frog. Despite the size, the little largemouth opened the textbook on what the fish wanted on this particular day: a slower presentation. Tyler and Jim had been twitching the frogs across the top of the mats at a moderate, steady rate until Jim got the first blow-up.

“Based on that bite, they may want it slow today,” Jim said. “Earlier in the week, it didn’t seem to matter. They were really in a feeding mode then.”

Taking a cue from Jim, both Tyler and I slowed down our retrieve. The best bite, in fact, appeared to occur when the frog was totally motionless.

“You have to figure them out from day to day,” Tyler said. “The bite changes, and you have to change with them, or you won’t get bit.”

As we continued fishing up the extended grassmat, Tyler got the next bite, a long 3-pounder that produced a washtub-sized blow hole in the grass. A few moments later, a slightly larger largemouth blasted through the grass, engulfed my frog, and burrowed into the grass before I winched it out with the heavy tackle provided by Jim.

The fish weighed perhaps 3 1/2 pounds, a good fish but not tournament grade on Guntersville.

As we moved upstream, the grass bite slowly tapered off. Jim continued to coax a few more explosive strikes, dropping his PowerPoles and fishing spots methodically. He caught a couple more smaller fish before changing locations.

We changed tactics and fished some scattered grass off the main channel downstream, tossing frogs, bladed jigs and spinnerbaits, ripping the moving baits through the grass in hopes of creating a reaction bite. That approach failed to produce, however, and we quickly returned to the mats to finish our trip.

Jim stopped on a nondescript mat just downstream from better-looking grass, and he turned the stop into a teachable moment.

“The grass right up there definitely looks better,” he said, “and we will fish it eventually. But it’s also probably been fished at least a dozen times today. Those fish have seen the frog.

“One way to catch more fish is to find those areas that have not been fished, that have fish that have either just moved in or have not seen that many baits.”

An explosive strike interrupted the discussion as the best fish of the day smashed Jim’s frog. Jim set the hook and finally managed to skid the largemouth, at least a 5-pounder, across the top of the grass. Inexplicably, the fish pulled loose just inside the mat.

“That’s what fishing was like earlier in the week,” Jim said. “Pull up on a spot, make a cast or two, and get bit.

“Fish that size usually don’t get off, especially when they are really eating the frog like that one did.”

The area produced a half-dozen more blow-ups over the next 15 minutes, an exhilarating ending to a good frog trip on Guntersville.

“This is the type of action you can expect,” Jim said, “a little lull and then a group of fish ganged up together.”

The first part of November is a great time to experience the frog bite on Guntersville. At some point in the month, wind and current start to break up the mats. Until that time, some of the best action of the year occurs on Guntersville.

“You usually don’t get a good frog bite until the first of October,” Jim said. “It started a little bit earlier this year because the heat had the fish shallow and because the grass was so good shallow. When it started matting out, it gave us a good opportunity to catch them on the frog.”

Jim said the November bite is a little different because the fish start feeding up for the winter. Earlier in the year, they are simply resting under the canopy, a situation that produces more of a reaction bite than a feeding one.

“(In November), you find a grassmat that’s the size of the front end of your boat, and it’s going to be the best mat you’ve ever fished in your life because the fish are all ganged up underneath there,” he said. “They will take the rod out of your hand when you find fish ganged up on a mat that small. That’s the difference when they start feeding.” 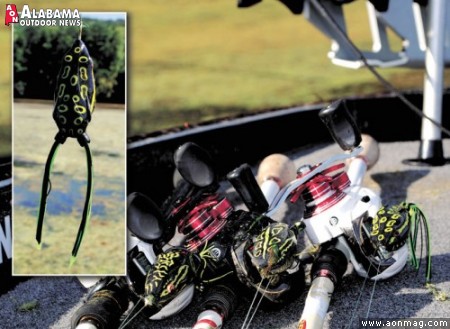 Jim targets those fish with the BD Frog, a new part of the line of Duckett lures produced by Castaic at www.castaicswimbait.com. As advertised, the BD Frog is softer than other brands but proves durable through repeated strikes. Jim and Tyler threw a 65 model on the day of the trip, but the frog also comes in a larger 75 model.

“I like throwing a real heavy, stiff rod,” he said. “I want something that will cast well for a long distance and get the fish out of the grass. The Triad has a good enough tip to work the frog either fast or slow, and it’s got enough backbone to pull them out of the mat.”

Power is important because even the smallest fish can get into the mat and feel like a 10-pounder.

Getting the fish out of the mat is only the first part of the equation. Creating a strike is a day-to-day experiment. Jim works his rod with a downward sweep to keep the frog from hopping, alternating the retrieve until he finds what the fish want on a particular day.

Opinions about hook sets vary. Jim said he sets his hook fairly quickly, but even that approach changes. He said one of the major errors of inexperienced frog fisherman is jerking the lure away from fish.

“Some people want you to count,” Jim said. “It also depends on the mood of the fish that day. The one that just bit right back there grabbed it right away. I always set it pretty quick. If they are not eating it, they will come back and slurp it down. I watch my line, and if the line begins to move, I let them have it. I drill them. I set the hook as hard as I can every time.

Later Jim added, “One thing they do wrong is to jerk right away, even if there is a little splash. Being inexperienced with this type of fishing can be a problem at first. It’s its own way of fishing, getting the bites that you get and getting used to them. They have to experience it to understand.”

“The instinctive reaction is to jerk,” Tyler said. “Nine times out of 10, you will jerk it away from them. I usually try to count in my head to three. See the bite, let the bass take it in, and then I’m ready for a hook set.”

Occasionally, the frog bite fails to materialize on a given day. Earlier in the fall, Jim flips NetBait plastics to the edge of the grass. As the grass begins to break up later, he turns to a variety of moving lures.

The frog bite normally starts upriver; Jim fishes as far north as Mud Creek but begins to follow the fish downriver. November usually finds him off the main river in the major feeder streams like North Sauty, South Sauty, Seibold and Alreds.

“There is a progression downriver,” Jim said. “I follow them. It seems to be that way every year.”

To book a trip with Jim, visit his Guntersville Bass Guides website at www.guntersvillebassguides.com or contact him on Facebook. He provides all equipment, including products by PowerPole, UnderArmour, Lowrance, Navionics, Mercury, Duckett Fishing, NetBait, Sunline, 4×4 Bass Jigs and Picasso.

Jim said a fall frog outing on Guntersville can prove to be the trip of a lifetime, adding that the experience of a big bass exploding on a frog is like no other.

“You think they won the lottery,” he said. “The look on their face when the fish actually blows up, it’s like, ‘What happened?’ They just don’t know what to do, even when you may have told them 10 times what to do. But when they finally get it, when the fish eats the frog, you’re their No. 1 person for a while.”